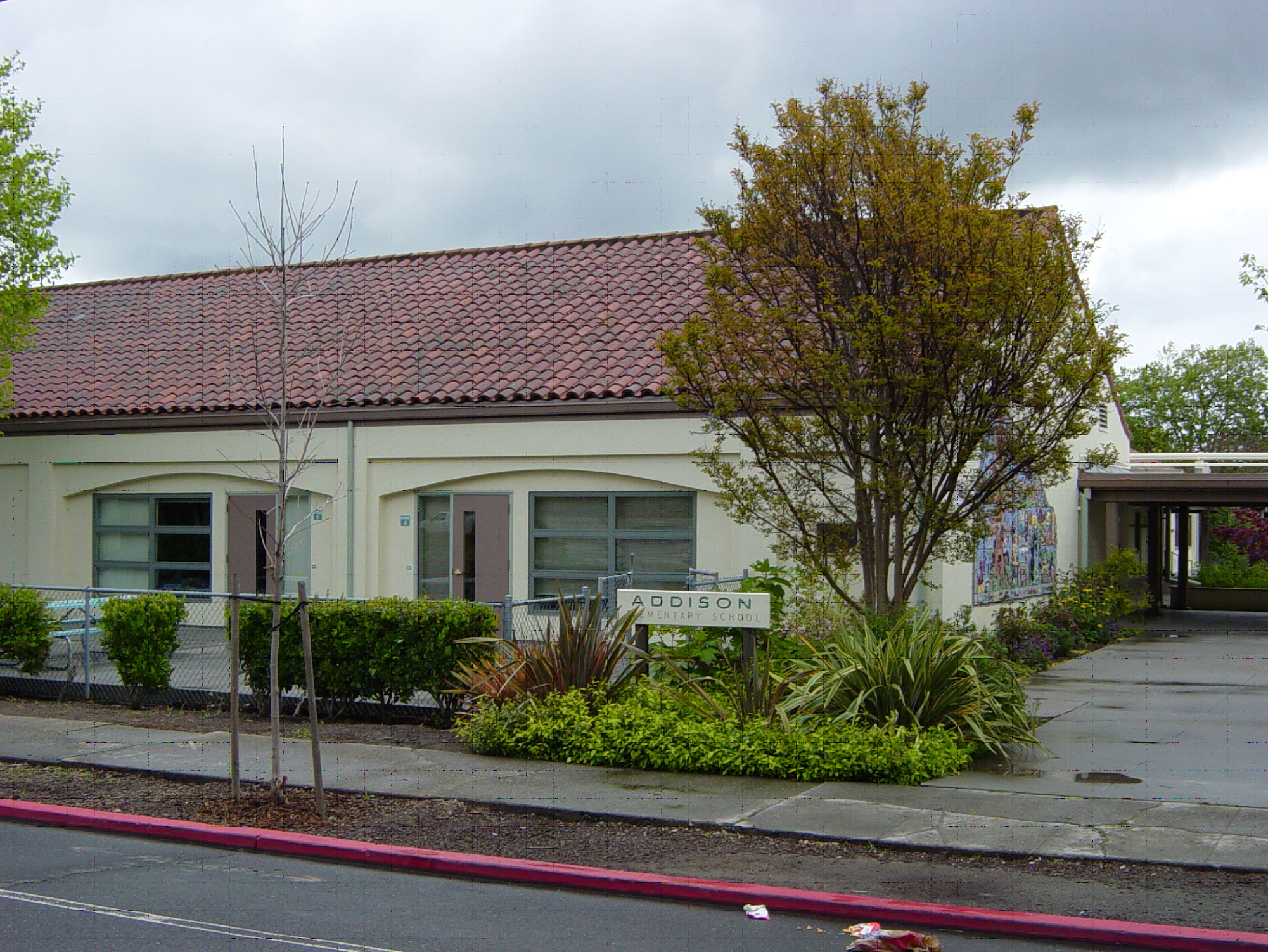 Addison Elementary School sits on a 4.6 acre site bordered on four sides by Addison Ave., Middlefield Rd, Lincoln Ave and Webster St.  Addison was founded in 1925. The school is composed of several permanent single-story buildings in a rectangular layout with an open courtyard in the middle

Replacements, new construction and modernization have occurred in the intervening years with major work in 1959 and the replacement of its original two-story building in 1969.

In 2005, two more relocatable buildings were placed on the hardcourt area to house an additional classroom and computer lab.

Construction is currently underway for the replacement of the administration, food service, library and multipurpose buildings and will include four new classrooms to be built within the existing Administration/Library building.

After this project, site needs will still include existing classroom upgrades, an additional enrichment lab, a learning center and site improvements.

PAUSD plans air conditioning installation at all schools in the long term plans. In conjunction with the air conditioning work the campus will require energy efficiency upgrades including envelope improvements such as new doors and windows, as well as solar panel installation. Classroom modernization will also include an upgraded technology infrastructure and equipment including projectors and LED screens.

A new wing will provide an enrichment lab, learning center and resource center. Two existing classrooms will be converted to enrichment labs.

The Addison campus is bordered by three neighborhood streets and Middlefield Rd., a major thoroughfare in Palo Alto.  Combined with the relatively small size of the campus and lack of on- site parking and drop off facilities, this creates a significant amount of conflicts between vehicles and pedestrians.

The asphalt parking lot is undersized for the size of the campus, but necessary due to the space available.  The current project will provide a drop off lane on-site but will reduce the number of parking spaces for staff. The hardcourt areas will also be in new condition once the current project is complete.  Concrete walkways are cracked around the buildings, with evidence of patching to remove past trip hazards.  The City sidewalk along Addison Ave. has uplifted significantly in some spots and should be removed and replaced in its entirety.

The site sanitary sewer is original and has not been replaced to date, but a new sewer line connection is being installed for the new building, so the capacity on the old line will be significantly reduced.  The water service is copper and was installed in 1989 with a new backflow preventer. All four fire hydrants serving the site are located off site in proximity to the campus. A new electrical service was installed during the B4E program.  The gas service was replaced in the new project, including new meter, and is underground and then run overhead exposed on the canopy around the classroom buildings.  Site drainage systems will either be new but appear to be in good condition where existing drains will remain. Grading the majority of the site will improve the drainage on campus significantly when the new project is complete.

The existing buildings on the Addison Elementary School campus are in generally good condition, having just recently be renovated as part of the Building for Excellence program.  However, this modernization program did not address several areas of the campus, which will need to be addressed with future funding.

The older buildings on campus have clay tile or rolled roofing, newer hollow metal doors and paint on the exterior.  However, the original windows were left in place, and include the original single pane glazing in most cases.  This is causing significant air infiltration and heat loss, which impacts the heating systems for the buildings during cold weather.

The campus will be made accessible as part of the new project, with path of travel and restroom upgrades throughout the campus.

The classroom interiors were all extensively modernized in 2003, with flooring, wall surfaces, markerboards, furnace units, lighting, power and data distribution all being replaced.  Portions of the casework were replaced with new plastic laminate units, with the remaining casework left in place as painted wood.  The glue up acoustic ceiling tiles were either replaced or left in place, and painted to appear uniform, diminishing the acoustic qualities of the tiles.

The Library and Administration areas will be converted to four new classrooms in the current project.