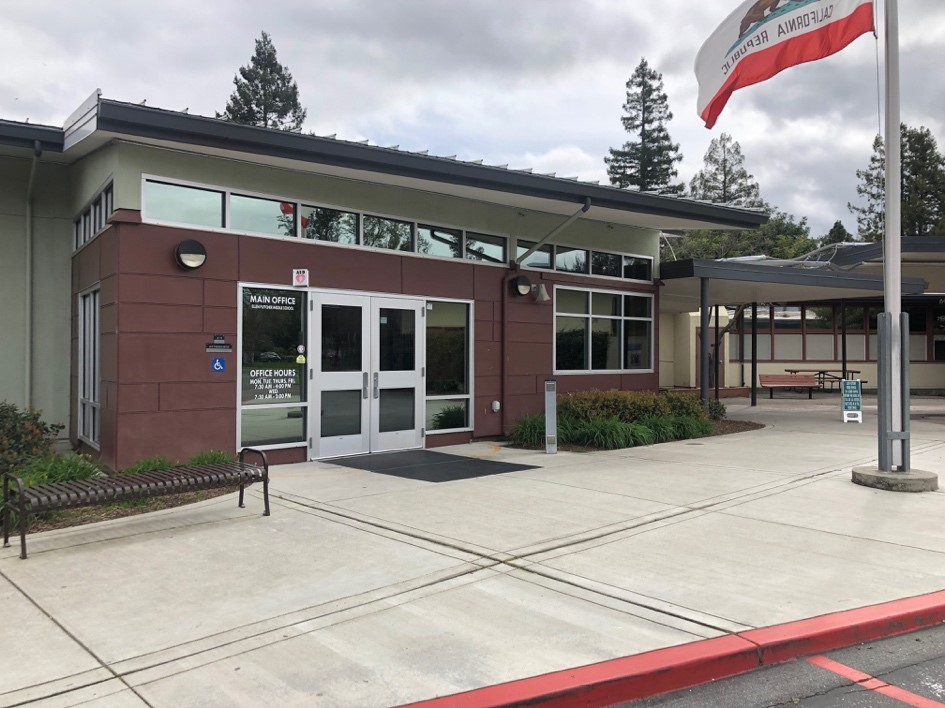 Fletcher Middle School is comprised of 11 single story buildings on a 26.2 acre site adjacent to Fletcher park, which serves as field space for the school under an agreement with the City of Palo Alto.

The school was originally built in 1957 and closed during the 1980’s as a result of declining enrollment. The facility was leased to the JCC for much of this period.

In 2003, the school was modernized from its use by the JCC and reopened as a small middle school site for grades 6-8.  In 2004, the K wing was also renovated into 5 more classrooms.

In 2014, a Strong Schools bond project included an addition and renovation of the Administration and Library wing, which relocated the Administration wing toward the front of the school for supervision and entry reasons. The Library was located toward the campus and included a sizable addition to expand the size of the library to district standards. The project also included renovations and seismic upgrades to the remaining buildings, since they did not receive full renovation the other schools did during the Building for Excellence program.

Below is a summary of needs communicated by the Site Committee and reviewed by the team for the Fletcher site;

Fletcher Middle School site is housed at a busy location in the City of Palo Alto along one of its main circulation arteries. The parking area and main school entry is off Arastradero causing some traffic congestion at the beginning and end of the school day.  The traffic too and from this site is regulated by a traffic light at the entry to the site. Modification to parking and traffic direction were recommended in a traffic study and implemented in the 2002/2003 remodel.

The buildings on the campus present a uniform style relative to the era that they were built. The buildings were constructed in 1957. The buildings are single story rectangular buildings with low sloping roofs of wood frame construction with stucco exteriors. The typical building has an exterior covered walkway; concrete slab floors with carpet or vinyl tile, gypsum board or plaster painted walls with some tackboard wall surfaces, suspended acoustical or painted direct glue-on acoustical tiles are the general ceiling components.

The condition of the facilities since the recent remodel is good to excellent, the exceptions being the windows and insulation.  During the 2014 project the buildings were modernized to meet current ADA standards and included voluntary seismic improvements.

The storm drainage system at the school overall is adequate. During rainy periods the site drains well and is relatively dry.

The paved areas around the site contain some cracks but are generally in acceptable condition. It is recommended that the cracks be sealed and all areas slurry sealed within the next 5 years.

There were a number of handicap parking spaces added and access ramps built during the 2001 project. The site has sufficient parking to meet state guidelines. Each building when modernized was required to meet current accessible standards. Access has been developed to all areas of the campus and toilet facilities are accessible.

The main water line around the site has not been changed. Some of the piping, internal to the building has been changed during the last project.  The existing piping system should be filmed and evaluated relative to condition. A 50% replacement of the exiting piping should be anticipated over the next 20 years.

The main sewer lines around the site have not been changed. It is recommended that the piping be videotaped to verify its condition to determine the need of replacement. Do to its age, some replacement of the existing piping should be anticipated.

The gas service and meters were not replaced under the last two projects. The service is adequate for the school’s current need. The gas lines internal to the site and building were partially replaced with the remainder being in good condition.

In general and based on the limited review of the buildings, it appears that the buildings do not pose life safety problems. During the recent project in 2014, the structural system of each building was reviewed and updated to current seismic safety codes. The current building conditions are not fully current code compliant but do not show to be life threatening. Despite recent improvements, minor building damage may occur during non-catastrophic seismic events.

The major heating system on campus consists on FA furnace units. The older boilers were replaced and controls updated under the 2004 and 2014 modernization projects. All buildings have been completely replaced with new controls. New HV units were placed on the Gym building in 2014.

Under the 2014 project all of the plumbing fixtures and interior piping in the toilet rooms of the modernized buildings was replaced. There are various sinks and drinking fountains around the site that are serviced by old piping. These will need to be changed in future interior remodels.

The site wide electrical system has been fully upgraded under the last two projects. A new service was installed and all of the existing building sub panels were replaced 2004, and upgraded again in 2014.   These installations included an increase in the site’s capacity. The fire alarm system has been upgraded for each building as it was modernized. Each building’s power capacity was upgrades as new data and power outlets were added to each classroom.  All the lighting within the modernized buildings has been retrofitted or replaced with new LED fixtures in the 2014 project, and also as part of a district-wide re-lamping program. Each building modernized has been tied into the campus wide EMS system.

In 2018, a photovoltaic panel system was installed in the parking lot, as part of a District-wide Prop 39 energy project.

The sitewide system has been upgraded under the 2004 and 2014 projects. An MDF room was constructed in 2004 and all of the buildings have been tied to the campus wide system. All classrooms have the district standard of nine data drops and a wireless access point in each classroom. This network also incorporates a VOIP telephone system and Valcom clock speaker system.

Except for Building A, the existing building’s envelope systems represents the original design when energy was cheap. Windows are not dual pane and insulation in walls and roof are old to none in most areas. An energy analysis should be completed on each building and plan developed to maximize energy efficiency. A envelope analysis is suggested when it is time to consider roofing, insulation and window issues being addressed.