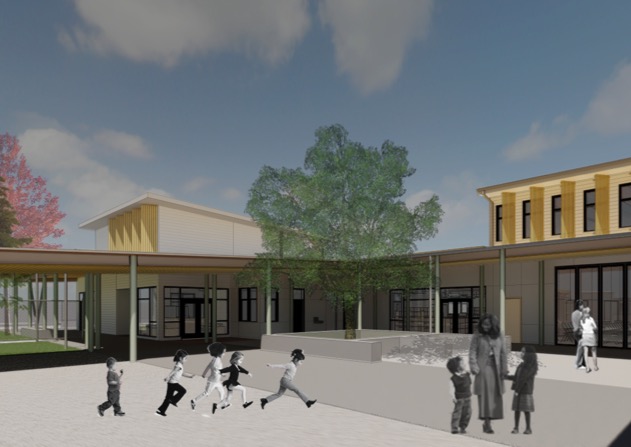 Hoover Elementary School is comprised of four permanent single-story buildings set in an L configuration around a central playground and field space.  Hoover was built in 1953.

The site, known also as “Old Ohlone”, is bounded on one side by East Charleston, and J.L Stanford Middle School with a driveway circling the campus on three sides. In 1953, the Administration building and two classroom wings were built as part of the original campus. Replacements, new construction and modernization have occurred in the intervening years including new rooms built in 1954 and 1958 The Multipurpose building was built in 1956 along with a Library building in an adjacent relocatable. After an extended school closure, the site was re-opened as Herbert Hoover Elementary in 1998 after a minor renovation.

The site did not receive the typical upgrades during the Building for Excellence program since it was retired during the 1996 bond and was not included in the bond language. However, some mechanical, fire alarm and lighting improvements and upgrades were built in 2005 as well as some cosmetic improvements.

There are seven relocatable buildings on this site, with five housing classrooms and two housing the Day-Care facilities. The Day Care facilities are actually located on the J.L. Stanford fields across the access road to Hoover.

A Strong Schools bond project currently in design include a new building that will house an expanded multipurpose facility, a Library and Administration office. There will also be two new enrichment labs, new learning and resource Centers and new classrooms to replace those currently in portables. Modernization of the existing classrooms will include voluntary structural improvements as well as the general upgrades done for most campuses during the Building for Excellence program. The majority of the site, including parking, drop-off, playgrounds and fields are scheduled to be replaced or renovated as part of this project.

Due to the breadth of the Strong Schools bond project, there are few needs left for the Hoover campus. Proposed remaining masterplan projects include:

PAUSD plans air conditioning installation at all schools. As part of the current work the campus will be made more efficient with energy efficiency upgrades including envelope improvements such as new doors and windows. The campus will be ready for solar panel installation as the district settles on a strategy.

The school is located on Charleston Ave. and has significant traffic issues with respect to drop off and parking.  The loop road and parking lot combined with student drop off and bus parking creates major conflicts between vehicles and pedestrians. The City of Palo Alto is currently in the process of improvements to the Charleston/Arastradero corridor which will alleviate some of the problems of ingress and egress. However, the opportunities to improve traffic flow on-site is limited due to the constraints of the site. Since the school is a ‘Choice’ program, many of the students live outside the attendance area, which increases vehicular traffic over a normal neighborhood school.

ADA site accessibility and parking spaces will be improved in the current project and will comply with ADA requirements at its conclusion.

The asphalt parking lot on campus was patched and was overlaid in 2005. The hardcourts were recently resurfaced and are showing no signs of failure. The redtop areas under the canopy were replaced in 2006.

The site sanitary sewer and the domestic water lines feeding the campus are original but will be upgraded in the next project. New fire water lines and hydrants will also be installed.  New gas and electrical service upgrades for this campus are also part of the current project.

Site drainage systems appear adequate, though there are some local areas of ponding.

All of the buildings on campus have new built up roofing and painted stucco on the exterior.  The original windows were left in place, and include the original single pane glazing in most cases.  This is causing significant air infiltration and heat loss, which impacts the heating systems for the buildings during cold weather. New windows to the existing buildings are not part of the current project, and are planned to occur whenever air condition and envelop improvements are done.

The classroom interiors in the original classroom wings were renovated in 1998 with new flooring, and paint, and in 2004, were outfitted with new furnace units and lighting.  No improvements were made to electrical panels and data distribution, nor was any of the casework replaced.  The glue up acoustic ceiling tiles were either replaced or left in place as part of the lighting replacement. Many of these upgrades will be done as part of the current project.

The Library interior was only slightly renovated as part of the 1998 renovation and remains as the single campus without a Library meeting the district standards. In addition, at 2,230 SF, it is one of the smaller libraries in the district. The Administration area was also renovated with new flooring and paint. Mechanical equipment, and lighting were replaced in the past two years.  The Multipurpose building was only slightly modernized, with new flooring and a handicap lift placed within the interior.  The Multipurpose building at 2,596 SF is undersized for the planned campus capacity.

Given the above, the Library, Administration and Multipurpose buildings will all be replaced as part of the Strong Schools bond project.