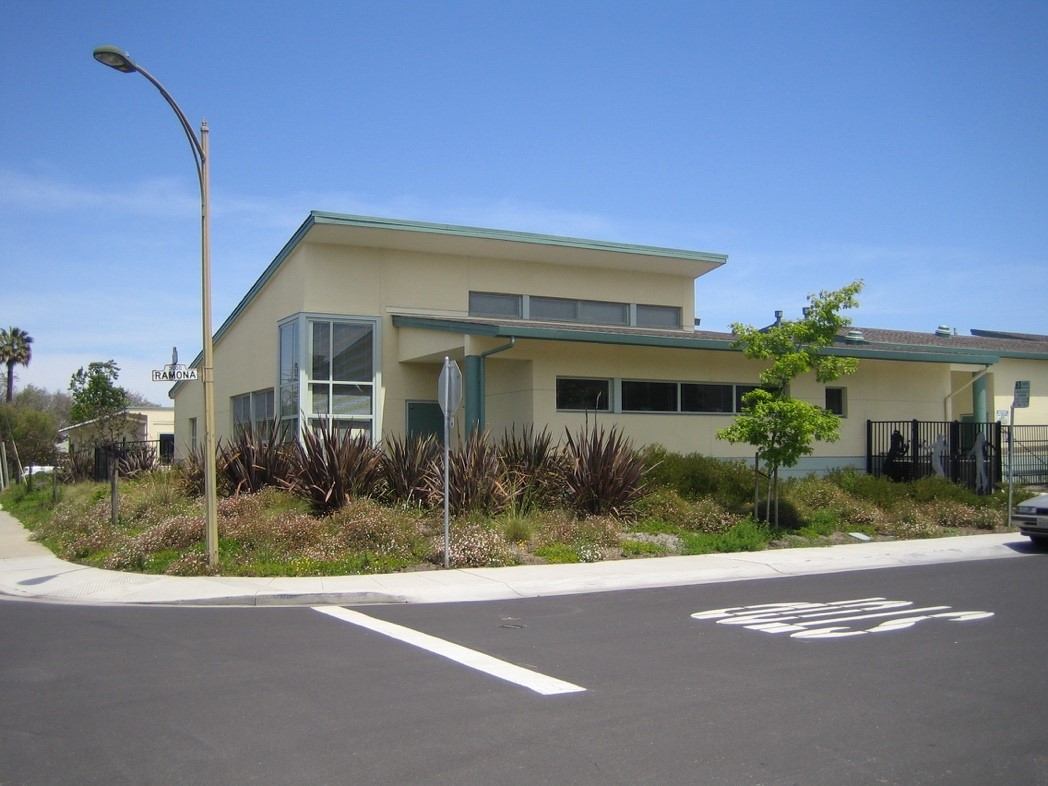 El Carmelo Elementary School is comprised of six permanent single-story buildings arranged in an elongated L configuration around a central playground and field space.  El Carmelo was originally built in 1955.

The site is bounded on all four sides by El Carmelo, Bryant, Loma Verde and Ramona Streets. The original buildings were the lower classroom wing along Bryant and the Administration building, which were built in 1955.  A Multipurpose building was constructed in 1957. A library resource building was built in 1967, which was rebuilt in 2001 along with a new classroom wing as part of the Building for Excellence program.

The 2001 project also included renovation of the existing classrooms and Administration building.  There are three relocatable buildings on this site, one housing a classroom and two housing Day Care facilities.

The Strong Schools bond project currently in design will construct a new Multipurpose building along Ramona, which will be centrally located on campus and across from the Administration wing. The building will include new restrooms, an enrichment lab and the new Multipurpose building and stage. An outdoor stage will open toward campus, and also include another large door that will open toward the fields. Significant rework of the paving and playground is also included in the project.  The old Multipurpose wing will remain and be split into an enrichment lab and resource space for reading and education specialists.

In addition, there are plans to add an accessible playground to the campus in conjunction with the above Strong Schools bond project.

PAUSD plans air conditioning installation at all schools. In conjunction with the air conditioning work the campus will require energy efficiency upgrades including envelope improvements such as new doors and windows, as well as solar panel installation. Classroom modernization will also include an upgraded technology infrastructure and equipment including projectors and LED screens.

The El Carmelo site was renovated in 2001 during the Building for Excellence Program. The student drop off was separated from the parking, and occurs around the perimeter of the site.   ADA site accessibility and parking spaces were improved during Building for Excellence, and the campus will be brought into compliance with current ADA requirements as part of the project in design.

The asphalt parking lot on campus is very small due to the lack of space on campus in general and the availability of street parking around campus. The hardcourts were most recently resurfaced in 2001 but will be replaced in the current project. The redtop areas under the canopy are cracked badly and will need to be replaced in the future as part of improvements to the classroom wings.

The sanitary sewer system is original and has not been replaced, though a new sewer connection will be made for the new Multipurpose building.  The domestic water system was replaced in 1977, with the backflow preventer being installed in 1989. These lines should be evaluated and replaced if necessary.  The fire water lines and hydrants are located off site, and in close proximity to the campus structures. A new electrical service was provided to the site in 2001 and the gas service is run overhead exposed on the roof  in 1976.  The site drainage systems around the perimeter of the campus, consisting of City gutter and drainage structures, appear to be in good condition.

The campus was upgraded for accessibility during the 2001 renovation, with path of travel and restroom upgrades throughout the campus. In addition, voluntary seismic upgrades were undertaken for existing buildings and canopy structures, except for the Multipurpose building. However, new codes will require some ADA upgrades for the project currently in design.

The existing buildings on the El Carmelo Elementary School campus are in generally good condition due to their most recently being renovated in 2001.

The campus currently consists of a long classroom wing along Bryant Ave. and six smaller buildings that surround the central play area. These buildings include an Administration wing, the Multipurpose Building, the Library and three classroom wings.

The original classroom wing has large windows running the length of the exterior walls and have volume ceilings and clerestory windows in each classroom.  Toward the center of campus, each classroom opens below a large canopy, where picnic tables are arranged outside each classroom to serve as an outdoor learning area for each classroom space.  Three other classroom wings consist of three classrooms each and were constructed in 2001. One of these wings is built with modular units on a concrete foundation.

The classroom buildings on campus have asphalt shingle or built up roofing, hollow metal doors and a painted stucco exterior.  The original windows were left in place, and include the original single pane glazing in most cases on the original wing.  This is causing significant air infiltration and heat loss, which impacts the heating systems for the buildings during cold weather.  The classroom wings built in 2001 have energy efficient glazing and don’t need replacement.

The classroom interiors were all modernized or new in 2001, with flooring, wall surfaces, markerboards, furnace units, lighting, power and data distribution being upgraded.  Portions of the casework were replaced with new plastic laminate units, with the remaining casework left in place as painted wood.  The glue up acoustic ceiling tiles were either replaced or left in place, and painted to appear uniform, diminishing the acoustic qualities of the tiles.

The Library was constructed in 2001 and is 3,180 SF.  There is no modernization work scheduled for the Library.

The Administration area was renovated with new flooring, casework and paint. Mechanical equipment, plumbing and lighting were replaced throughout. This building is scheduled for replacement and expansion in the future.  The Multipurpose building at 2,566 SF is undersized for the planned campus capacity, and is currently being designed with a new stage, servery, storage and two enrichment labs.